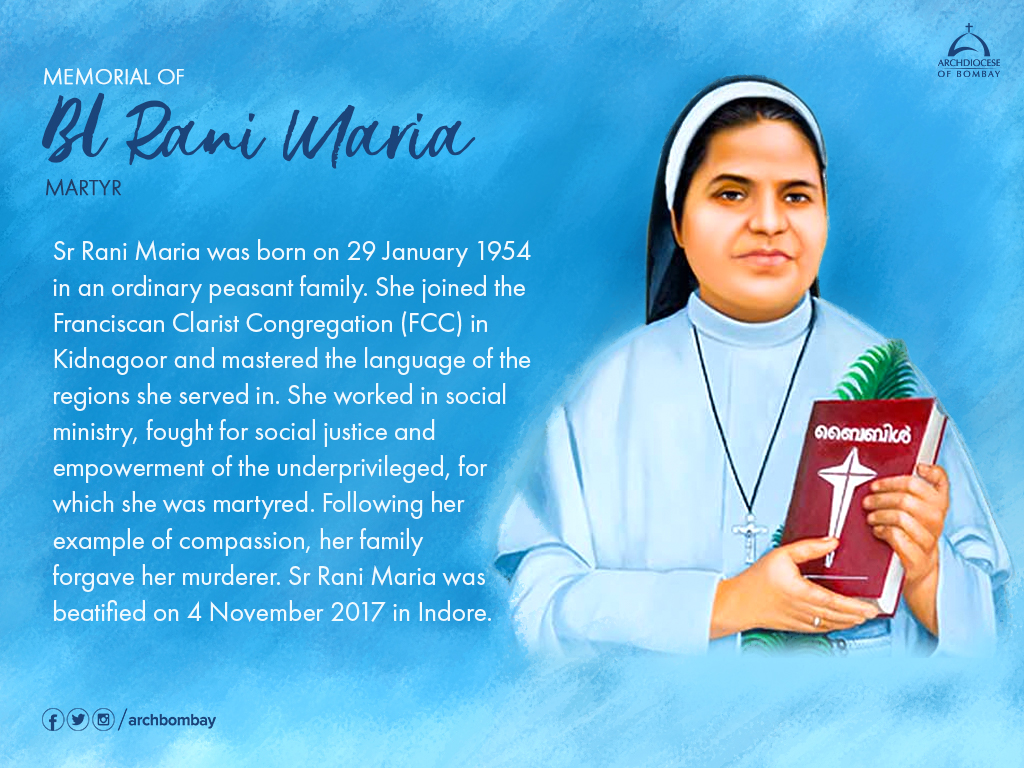 Sr. Rani Maria was born on 29 January 1954, as the second child of Paily and Eliswa of Vattalil, in an ordinary peasant family. Her God fearing parents brought her up in Christian faith and charity along with their six other children. From her infancy her parents and grandparents made her understand the importance of prayer, and she regularly attended Holy Mass and took part in the popular devotions.

During the final year of her school, she shared her inner promptings with her cousin Cicily. The frequent visit to a nearby convent, helped them to make a decision to enter the Franciscan Clarist Congregation. She made her first profession in Franciscan Clarist Congregation on 1st of May 1974 under the new name Rani Maria. Hearing the experiences of missionaries, she was inflamed, and would often repeat: “I too want to go to North India, to serve the poor and die for them”.

She arrived at St. Mary’s Convent in diocese of Bijnor on 24,h December 1975. She served as a teacher for two years, and also was engaged in social ministry. She then did admirable work for the poor and downtrodden at Odagady in the diocese of Satna, and at Sneha Sadan, Udainagar.

As an experienced Social worker, through various conscientization programmes Sr Rani Maria made the poor aware of their rights and injustice perpetrated on them. She became the object of the displeasure of their oppressors, who looked upon her work to uplift the poor as attempts to convert them to Christianity. As a result, on 25th February 1995, as Sr Rani Maria was travelling on a bus, she was stabbed her by a knife to death. Unto the last she kept on saying “Jesus! Jesus!” She was beatified on 21“ March 2017. Her Feast day is celebrated on February 25 each year.