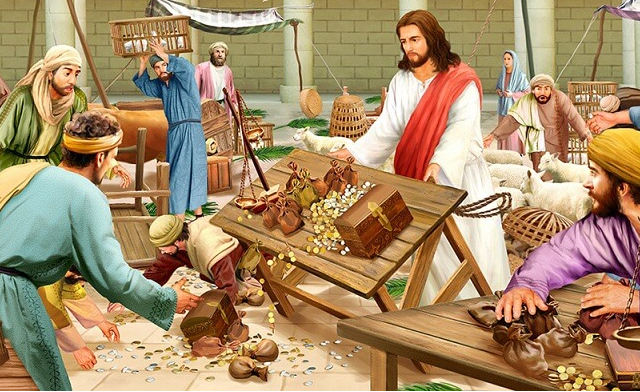 Reading 1: Ex 20:1-17 We hear of the commandments that God gave to Moses on Mount Sinai. They are a map of life for a people that has a special relationship with God.

Reading 2: 1 Cor 1:22-25 St. Paul reveals the content of his preaching, namely, Christ crucified. To some the idea of a crucified Saviour makes no sense whatsoever. But to those who can grasp it, it is a sign of the wisdom of God.

Gospel: Jn 2: 13-25 John gives his account of the cleansing of the Temple and how the Jews reacted to this “sign.”

DOING GOD’S WILL IS TRUE WORSHIP

God does not need a house to live in, like we do. We are soul and body, whereas God is pure spirit. Rain, cold, heat does not affect him; he does not need shelter. He is everywhere at one and the same time. Heaven and earth are the work of his hands, and no house, however large, can contain him. Yet God, through Moses, instructed the people of Israel to offer him sacrifices of animals, the produce of the fields, etc. Twice daily, a lamb was sacrificed in the Temple of Jerusalem and offered, together with flour, oil and wine. On solemn feast days and various occasions, pigeons, lambs, bulls and other sacrifices prescribed by the Law of Moses were done.

Why did God ask for these sacrifices? What was the motive behind these instructions to the people through Moses? God had chosen the people of Israel from the nations, so that through them, faith in him may be sustained, nurtured and shared to other nations, and that the world be prepared to receive the Messiah. Now, those nations and pagan tribes that were Israel’s neighbours practised these rituals of animal sacrifices and fruit offerings in honour of their idols. On occasion, they even sacrificed their own children to their gods. Had not the Israelites been given ways of worship similar to theirs, they would have been drawn to their idolatrous and sinful practices. History testifies to their constant temptation to imitate these neighbours of theirs, for example, their demand for a king from Samuel. Hence, God prescribed for his people, in detail, what they were to offer and how they were to do it. God, like a father and teacher, adapted himself to the narrow and shallow mindset of his people. Through these material sacrifices, he would lead Israel to express its faith and trust in himself thus preparing them for a more genuine form of worship. “For you do not delight in sacrifice, or I would bring it; you take no pleasure in burnt offerings. The sacrifices of God are a broken spirit; a broken and a contrite heart, O God, you will not despise” (Ps 51:16-17).

In today’s gospel we have an episode that takes place in this same Temple; we are told that Jesus was angry at the things going on there. He certainly did not condemn the sincerity and good faith of the simple people who honoured his Father as best they knew by fulfilling the rules prescribed by Moses. He admonished instead, the greed of the religious leaders who took advantage of this simple faith to become rich under the pretense of honouring God.

All the four gospels narrate the chasing of the traders and money-changers by Jesus, and his fury at those conducting business in his Father’s house. The reply given by Jesus to the Jewish leaders was a prophecy of his death and resurrection. “Destroy this sanctuary, and in three days I will raise it up.” Jesus called himself the sanctuary, indicating that a precious worship was being conducted within his own self. And indeed, it was. As he declared to his apostles at the beginning of his passion: “It is for this purpose that I have come to this hour. Father, glorify Your name!” Then a voice came from heaven: “I have glorified it, and I will glorify it again.” (Jn 12:27-28)

Christ came into the world to teach us how to worship his Father in a worthy manner; to worship him in the way he himself did, by a life of complete obedience to his will. Through baptism, each of us are blessed with the same privilege of being God’s temple. God’s temple is where God’s will is done. And in this way, he is worshiped and glorified. May our external acts of worship be a manifestation of the constant attitude of worship that reigns in the depths of our hearts.

Responsorial Psalm: PPs 19:8-11 Lord, you have the words of eternal life.