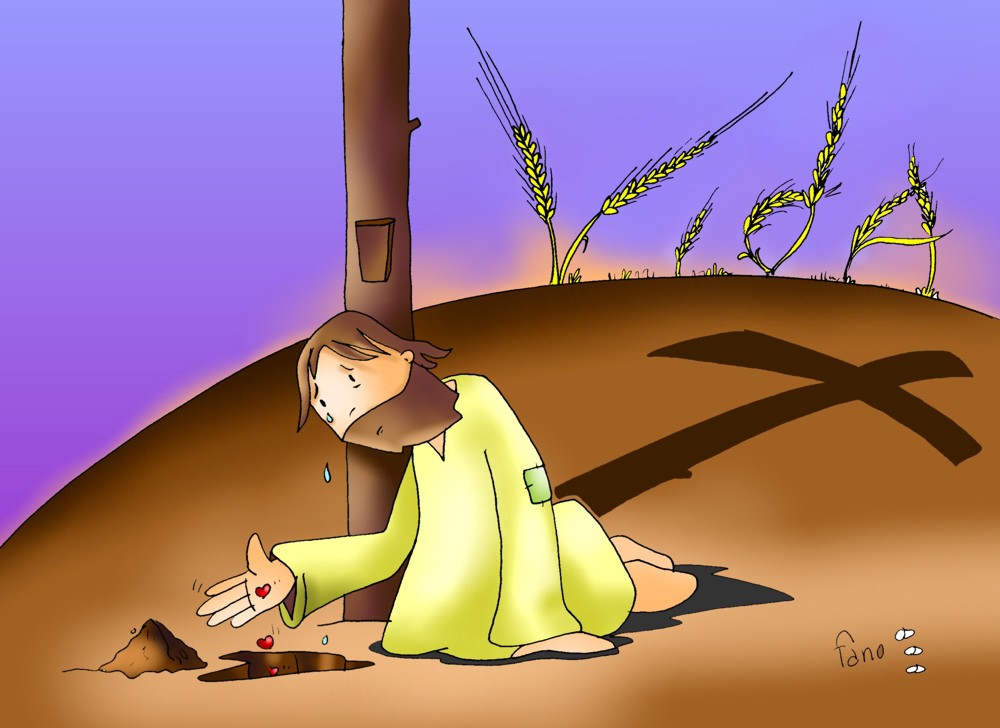 Reading 1: Jer 31:31-34 od tells the nature of the “new covenant” he will make with his people: “I will place my law within them, and write it upon their hearts.”

Reading 2: Heb 5: 7-9 The reading gives the nature and effect of Jesus’ sacrifice: Son though he was, he learned obedience from what he suffered.

Gospel: Jn 12: 20-33 Jesus shows us the law of life: The grain of wheat must fall to the earth and die if it is to bring forth fruit. He speaks of himself.

THE HOUR OF OUR SALVATION

In the gospel of the day, we hear about some Greeks coming and requesting the apostle Philip that they would like to meet Jesus. These Greeks could have come from Greece or the Decapolis (a group of ten cities near Galilee with large Greek populations). Given the Passover setting, it is likely that they were Jewish proselytes (circumcised converts to the Jewish faith) who were permitted to participate in Jewish festivals. However, it is also possible that they were “God fearers”, uncircumcised Gentiles who worship the God of Israel.

Let us consider the response of Jesus. When the disciples expressed the desire of these Greeks to see him, Jesus announced “The hour has come for the Son of Man to be glorified.” Why? What was the significance of these Greeks and their desire to see Jesus? These Greeks signaled a turning point in the ministry of the gospel.

The Jewish people had rejected Jesus as their Saviour. Now, the gospel would go out to the Gentiles as well. Salvation would now be proclaimed not only to Israel, but to the whole world. It was time for God’s law to be written on the heart of every person. It was time for the Messiah to revealed and proclaimed to all of humanity as its Lord and Redeemer, that he may be recognized, accepted, loved and glorified. And that would happen only by his death on the cross. For, as he said himself, “When I am lifted up from the earth, I will draw all people to myself.”

But did the disciples understand what he meant? Jesus goes on to tell them a short parable about the nature of seeds to explain what he meant about his hour of being glorified. His audience, which included many who were among the rural folk in Palestine, could easily understand the principle of new life from nature. Seeds cannot produce new life by themselves. They must first be planted in the earth before they can grow and produce fruit. The image of the grain of wheat dying in the earth in order to grow and bear a harvest was meant to convey to them the significance of his own death and burial in the tomb and his resurrection.

Jesus knew that the only way to be victorious over the power of sin and death was through the cross. He reversed the curse of the first parents’ disobedience through his obedience to the Father’s will – his willingness to go to the cross to pay the just penalty for our sins and to defeat death once and for all. His obedience in dying on the cross obtained for us freedom and new life in the Holy Spirit. His cross freed us from the tyranny of sin and death and showed us the way of perfect love.

If we want to experience the new life which Jesus offers, then the outer shell of our old, fallen nature must be broken and put to death. In Baptism, our “old nature” enslaved by sin is buried with Christ and we rise as a “new creation” in him. Death leads to life. When we “die” to ourselves, we “rise” to new life in Jesus Christ. What does it mean to “die” to oneself? It certainly means that what is contrary to God’s will must be “crucified” or “put to death”.

God gives us grace to say “yes” to his will and to reject whatever is contrary to his loving plan for our lives. It is through obedience to him that we can share in the fruits of the victory of Jesus Christ over sin and death – the glory of eternal life. As the author of the letter to the Hebrews says in the second reading, “He became for all who obey him the source of eternal salvation.”