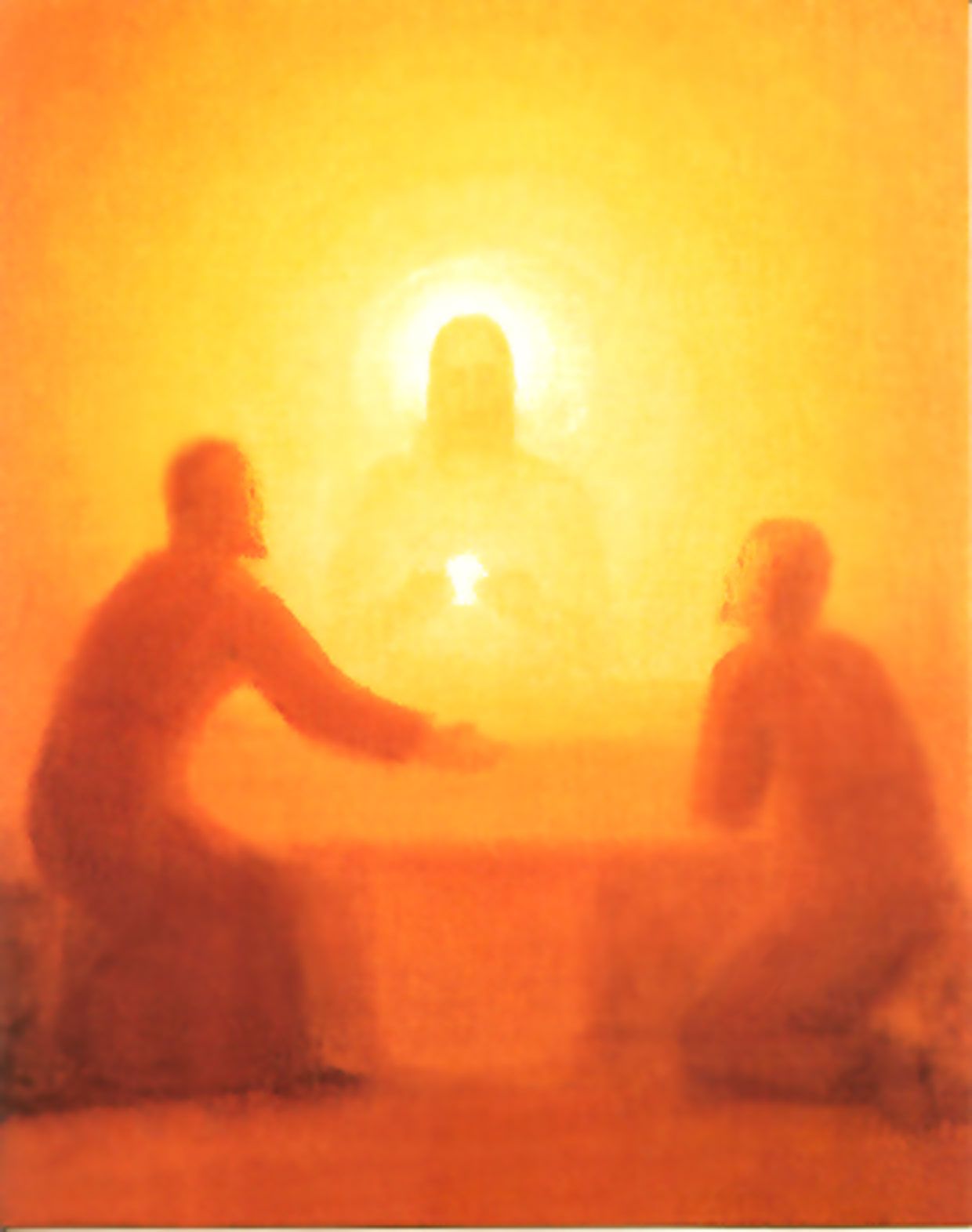 Reading 1: Acts 3: 13-15, 17-19 Peter speaks to the people of Jerusalem, tells them they have acted out of ignorance in killing Jesus, and exhorts them to reform.

Reading 2: 1 Jn 2; 1-5 John states that his purpose in writing is to keep his people from sin, but if they fall again, Jesus will forgive them.

Gospel: Lk 24: 35-48 Jesus again appears to the apostles, proves he is risen by inviting them to touch him, proves from Scripture that the Messiah had to suffer and urges the preaching of penance to all nations.

The Risen Lord is most powerfully present at the Holy Sacrifice of the Mass. This is the message of the readings today. The Gospel begins with the two disciples narrating to the disciples in Jerusalem, their experience of the Risen Lord on the way to Emmaus. These two men were on their way out of Jerusalem, dejected and grieving. They were dejected because they had just witnessed the death of their Master, the one in whom they had placed their hopes and dreams. They grieved because they loved him. If they had first joined his group of followers because they admired him as a leader, they eventually came to understand his immense love for them. They grieved, because they lost a loved one.

Adding to their sorrow, some women began babbling about having seen him alive. They just had to get away from Jerusalem, from the place that kept reminding them of him, from those that kept pounding on their already heavy hearts with their hallucinations and visions. He was dead. They were witnesses to it. Put to death in the most excruciating and humiliating manner. They had to try to pick up the pieces of their lives elsewhere, away from Jerusalem. It was in this state that these men, consoling one another in their grief, encountered a stranger, who unraveled the meaning of the Scriptures as they journeyed together, and who then, on their invitation, sat down to share a meal with them. And it was in the breaking of the bread that they recognize the Risen Lord.

The liturgical celebration of the Holy Eucharist can be said to stand on two pillars – the Liturgy of the Word and the Liturgy of the Eucharist. The Liturgy of the Word reaches its highpoint at the proclamation of the Gospel, where everyone rises, while it is the Consecration, at which all genuflect in adoration, that can be considered as the summit of the Liturgy of the Eucharist. The unraveling of the Scriptures and the Breaking of the Bread. These disciples on the way to Emmaus, encountered the Risen Lord at the Mass. How so? Because they loved the Lord, and they grieved for not having him with them anymore. Such was the intensity of their love, that it drove them back to Jerusalem that very night to fulfill the mission, i.e., to share the joy of the wonderful encounter, of the good news. If it isn’t love that draws us to the Mass, it becomes for us a mere ritual, a ceremony, an obligation or at the most, an act of devotion.

Coming to today’s gospel, what do we find? Closed minds. Doubts rising in the hearts of those who were among the Lord’s chosen; some had been present at his greatest miracles, had had a glimpse of his glory on Mount Tabor, and had had their feet washed by him at the Last Supper. These had refused to believe the women. Now, they refused to believe these men. But that was not all. Jesus appeared to them, showed them his hands and feet, appealed to them to touch him and see for themselves that he is truly alive, yet they stood where they were, dumbfounded and in disbelief. It is only when he ate with them, and then explained the Scriptures to them, that they came to believe and received the mission of being his witnesses. Did not they too, encounter the Lord at the Mass?

What is it that we prepare ourselves for at church? A one-hour event? How perfectly we know the responses to the prayers; yet, are we praying? Or are our minds already set about the priest and his long sermon, or preoccupied about the chores we have to complete after the ‘religious one’ is off the list, or focused on the friends we’d like to have a chat with after the ‘community gathering’? No matter how sweet, the fragrance of the flowers tries in vain to enter a room with windows shut. No matter how many signs of his presence and of his mission for us the Lord presents at the Holy Eucharist, a closed mind will turn us blind.

Every person hungers for this act of worship, for we were made to worship God in that way. God, in his goodness, responds to that hunger. In the midst of the disciples’ confusion and blindness, Jesus sought them out, offered himself to them, and opened their eyes. He wishes to meet all of us on our road to Emmaus.