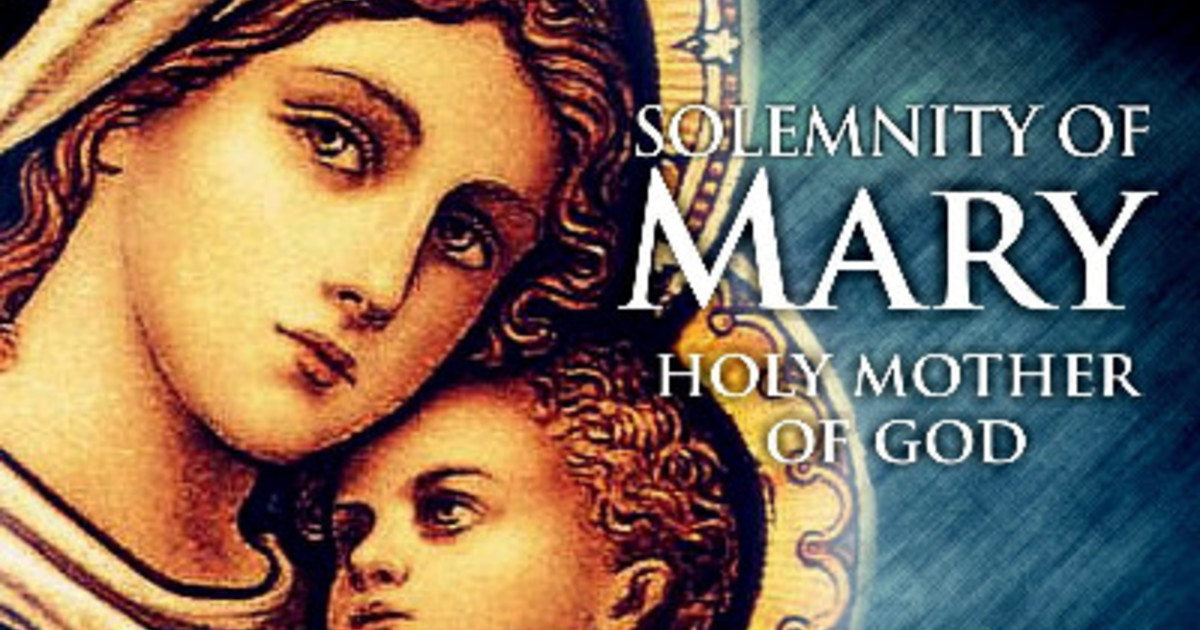 It’s the beginning of a new year, and what does the Church offer us at the start of the New Year? A very comforting and hope filled message: God’s assured blessings. Through the first reading, God solemnly proclaims his blessing on us all. The Word of God says that God puts his name on his people. He seals us in his name, confirming that we are his, adopting us as his own. What a beautiful message to fill us with zeal and enthusiasm for the new year! Let us enter the new year knowing that God is watching over us with the concern and love of a Father.

Our Christmas Octave would not be complete without giving thanks to the glorious Mother of God! Mary, the mother of Jesus, the mother of the Saviour of the World, “Mother of God.” In Mary, God found a mother and man found God. The Son of God became the son of Mary, hence she is the ‘mother of god’. Being the mother of God was not just a privilege but also a commitment, she humbly bowed down and carried out faithfully the will of God. Her motherhood was not only a crown but it also involved a cross which she carried in her heart while her son carried it on his shoulders. Her motherhood was not just a gift which a woman receives but it was also a sacrifice as a mother. Mary not only gave space for Jesus in her womb but also gave him the highest place in her heart. Mary’s motherhood was not just all about the Magnificat but it was also sorrows. Her motherhood involved not just words of appreciation i.e. Elizabeth’s praises: ‘blessed are you among women’ but also painful words in the form of Simeon’s prophesy: ‘a sword will pierce your soul.’ Mary not only became the mother of God but truly lived to be so. At the birth of Christ, she became the Mother of God in flesh. At the death of Christ, she became the mother of us all in spirit. However, it should be noted that she was a mother in perfection and loved Jesus with a perfect love. He who was not only her Son, but was also God and was perfect in every way

What does this reveal to us? It discloses that the motherly love shared between Mary and Jesus was profound, inspiring, mysterious, glorious and truly sacred! The mystery of their love is worth reflecting on throughout our lives, keeping it fully alive in our hearts. She is an example for all of us who seek to love others with a pure heart.

Today’s feast of Mary, the Mother of God, was instituted because of a controversy in the early Church. Some people began to disturb the faith of the people by separating Christ into two persons – one human and the other divine and called Mary as mother only of the man Jesus. They refused to accept in faith the mystery of the Incarnation, i.e. God taking upon himself human nature. Jesus is fully human just as he is fully divine. To emphasize this truth, the Church instituted this feast. However, even today, this title causes a lot of confusion among believers. We must be clear that this title does not mean that Mary is a divine being or a goddess of some sort. She is human just like us, and experienced the same joys and sufferings of life that we do. She was, no doubt, given the special grace of being immaculate since conception; but this was because of her chosen mission – to bring forth from her immaculate flesh, the Son of God. We too are given the grace to be pure and are washed clean of every sin at Baptism. Mary’s greatness lies in her unconditional surrender to the will of God, and this is what makes her so blessed.

The Son of God became man so that humans may share in his divinity. In other words, through his Son Jesus, God has adopted us as his own children. By celebrating the feast of Mary, Mother of God, the Church publicly proclaims Mary as not only the mother of the baby Jesus, but the mother of the same Jesus who is the Son of God. By raising Mary, a human like us, to the state of being the mother of his Son, God once again invites us to accept the gift of eternal life. The Church reminds us at the beginning of the year, that God has created us for eternal happiness, and it is towards that goal that we must journey

Response: O God, be gracious and bless us.